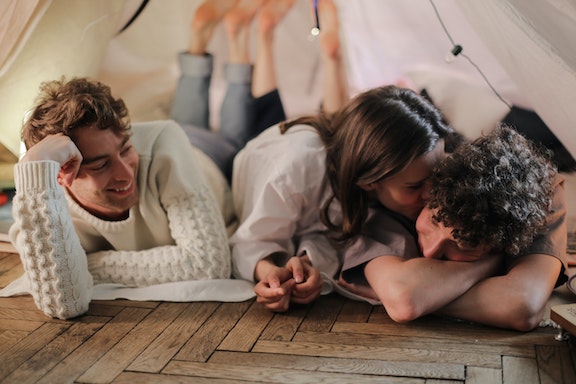 It wasn’t always. I was monogamous for a long time. And happily so. And I probably could be again. But I am not monogamous now. I am ethically non-monogamous, which means that I am non-monogamous with my partners’ consent and knowledge.

When I got into the kink Scene, I was surprised by just how many kinksters were some form of non-monogamous. It was a lot. Not everyone. But ALMOST all of the kinksters I know, and by that I mean people who go to kink events, are at least a little bit non-monogamous.

Certainly not all are polyamorous, people who love/are in emotional and romantic relationships with more than one person at a time. Some have open relationships, where they’re free to have sex with other people. Some are swingers, who typically have sex as a couple with other couples. Some have kinky play with others but save PIV sex for one partner. It’s all over the map. You could probably even throw cuckolding in there, although for all of the phone play I do about cuckolding, I can’t even think of one personal friend I have who I know is into it in a relationship.

And people all identify in their own ways. There are people whom I might identify as swingers (who are not necessarily kinky…you can be a totally vanilla swinger), who identify themselves as polyamorous. They could be both. And there are some people who say they are poly, but who are stretched so thin, I might say that they are having emotional relationships with some people but just having fun, casual sex with others. Just because someone gives you a label, it doesn’t mean that label really defines a person.

I’m hesitant to try and explain why non-monogamy is so prominent in the kink Scene. I think there are millions of monogamous folks who are privately very kinky with their partners. So, I don’t think it’s that kinky=non-monogamous at all.

I suspect it has a lot to do with disposition and accessibility. People who who are likely to go to events with other kinky people, go to play parties, even play publicly, have a certain kind of disposition.

Kink is either important enough for them to want or need to share it with other people or exciting enough for them to want to share it with other people. They either don’t have the fear that vanilla people are going to find out about them or are willing to take the risk (while usually trying to mitigate those risks). So, perhaps there is some element of risk taker in all of us. And maybe that element of being risk takers makes us more likely to seek out new experiences with new people. Maybe.

As for accessibility, it is simply this. When I led a monogamous life that was mostly vanilla but quite kinky in my fantasies (and was pretty happy with that arrangement), I didn’t have a lot of accessibility to new partners. Yes, I could have gone on dating sites without my partner’s permission. I could have tried to find some guy to cheat with on the side. But I didn’t do that because I don’t “cheat.” I respect the people I love. And, also, I just wasn’t interested enough in the idea to seek out someone new.

But once I was in the Scene and there were SO many people around me who were some flavor of non-monogamy, well…it was a little bit hard to resist. Especially after so many years of the same flavor. I wanted to taste ALL the flavors. Okay. A few more flavors. I’m pretty picky with my flavors.

Because non-monogamy was so accessible, and because the kink culture is very fixated on consent, which tends to (tends…not a guarantee) make that kind of experimentation feel pretty safe, and because it is on the whole inclusive and friendly, it was easy to dabble and then suddenly and quite quickly jump right in! (I do also want to make a caveat that there are certainly consent violations that occur in the Scene, and there are people who don’t act ethically and/or nicely. Unfortunately, that kind of behavior can happen anywhere.)

But I have gained a lot of knowledge about myself and other people, and had a lot of fun and excitement in the process. I’ve also cried a lot too! More people, more problems!

2 thoughts on “Kink, Polyamory and Non-Monogamy”