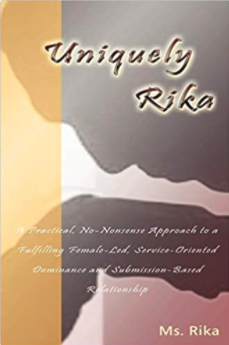 Yesterday, I gave you smut. I hope you enjoyed it. It was Smuterday!

Today I’m going to get a little more serious. In my phone forays (and certainly before them), I have been hearing from a lot of married men with vanilla wives who wish their wives would be more dominant.

I admit, I find it sad to know that these men are either afraid to tell their wives about their desires or have done so and been rejected.

And really, nothing may change that. People’s sexuality is somewhat hardwired into them, and although it can evolve as we get older and have new experiences, in the end, you like what you like!

But I did want to tell you about a book that I think really is excellent if you are in a long term romantic relationship with a vanilla woman and you want her to indulge and hopefully enjoy your submissive tendencies. It was a book that I read that gave me a very different way of looking at female dominance and male submission.

The thing is that this is not a really “sexy” book. It’s not about whips and chains and getting made fun of for your cock or getting teased and edged and locked into chastity. Might all of those things happen? Maybe, but the focus of the book isn’t on kinky play. It’s on submission and pleasing your partner.

The book is called Uniquely Rika. It’s on Amazon. It’s expensive for a book. I get nothing from recommending it, but I think it’s worth a read if you’re in this kind of situation. Ms. Rika also has her own group on Fetlife, where she is pretty active if you have questions.

I won’t go too in depth about the book because you can read the reviews and the previews, and you might find that it isn’t at all what you’re looking for, because the book isn’t about focusing on your kinky desires. It’s about pleasing your partner.

The thing is that a lot of supposed subby guys I’ve met focus A LOT on all the kinky stuff they wish women would do them and not actually very much on what would REALLY please their partners, which is kind of funny when you think about it. Right? But that’s because they don’t think about what their partners want as kinky or fitting in with their fantasies.

What Ms. Rika’s books do is reframe submission. They are much more about having FLRs (female led relationships) than kinky sexual relationships. Kinky sex MAY be a part of the relationship, but the idea is that if you’re really striving for submission and you’re trying to coerce your partner into wanting to tie you up and do bad things to your cock, you aren’t being submissive, and if she’s not already into the idea of binding you and doing bad things to your cock, it’s not likely to miraculously start happening.

I would just say that if you’re in this kind of long term relationship, you might want to give this book a read. It also might help you rethink if you are really into submission or just being a bottom (both fine, but different things). What it really does is take the WORK of what we tend to think of as female dominance off the woman (and that is its own post) and put it back on the person, the man, who SAYS he wants to do the work anyway.