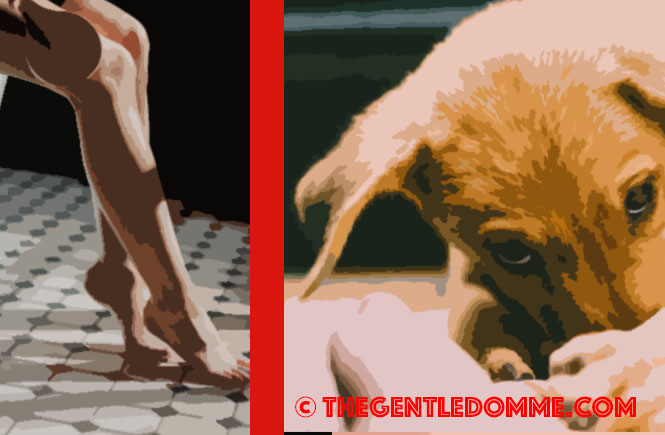 Last night my boy and I tried a little puppy play. This is something we’ve toyed with before a few times, but only half heartedly. I’ll admit that although I love calling him a “good boy,” because he is SUCH a good boy and the compliment is well deserved…it’s usually in the human sense. But lately I’d been feeling like we needed to try something new. You know. Chastity and denial are fine and and fun, but even a gentle domme has to keep things fresh. Right?

Although the puppy hoods and mitts and tails are adorable, they’re also expensive. I’d like to try some out sometime, but they’re an investment. Check out these UMMMAZZING ones from Mr. S Leather. So, we didn’t go with any props this time. Only an eager attitude on his part and a stern yet gentle presence on mine. I admit, I never have done a very good job training my actual pets. I just love them so much and they’re so smooshy. I end up spoiling them. Sigh. I think there’s obviously a trend there. I knew my stern demeanor wouldn’t last long. But I tried–for about as long as it took for him to start humping my leg, and then I broke out into my usual giggles.

Is it the desperation?

Is it the whimpering?

Is it the pathetic yet endearing look in his eyes begging me to take pity, his real and true attempts not to have an orgasm when I gently grab his chin, look deep in his eyes and simply say–NO.

He likes it when I remind him.

I told him he was such a good puppy. My puppy. My sweet, eager, desperate, lovely little puppy who was mine to do with what I wanted. I told him to wag his tail, which he did with both embarrassment and pleasure. I told him to stick his paws out in front of him like the eager puppy he was and bark for me. And when he did, with a shy smile and red cheeks, I patted him gently on the head and told him again how good he was and that he’d earned a treat.

Oh. You should have seen him. He was a VERY excited puppy then!

I told him that as a special treat, he could hump my leg–and that he wouldn’t be a bad puppy. He would be a good puppy, because I knew he needed a release and he’d been very patient and amusing. And I like to keep him either full or empty for me. I like the process of making him desperate and straining and full and then emptying him totally so we can start nice and fresh.

So, I let him keep humping my leg, rubbing himself as best he could against my skin. (I admit I might have helped a little. I’m not very mean.) And he really was good. Even when he came, practically collapsing against me, letting go with a giant sigh of relief, he kept his hands behind his back the whole time, spurting all over my bare legs and the floor.

“You made such a mess,” I said, and he blushed. I love it when he blushes. And he hates being messy, so of course I love it.

Once we cleaned up a little, I let my lovely puppy sit on the couch with me. See. I told you I spoil them. 😉 And we cuddled, and I petted him. He really is such a good boy.

This definitely won’t be the last time we do puppy play. Any suggestions for next time?