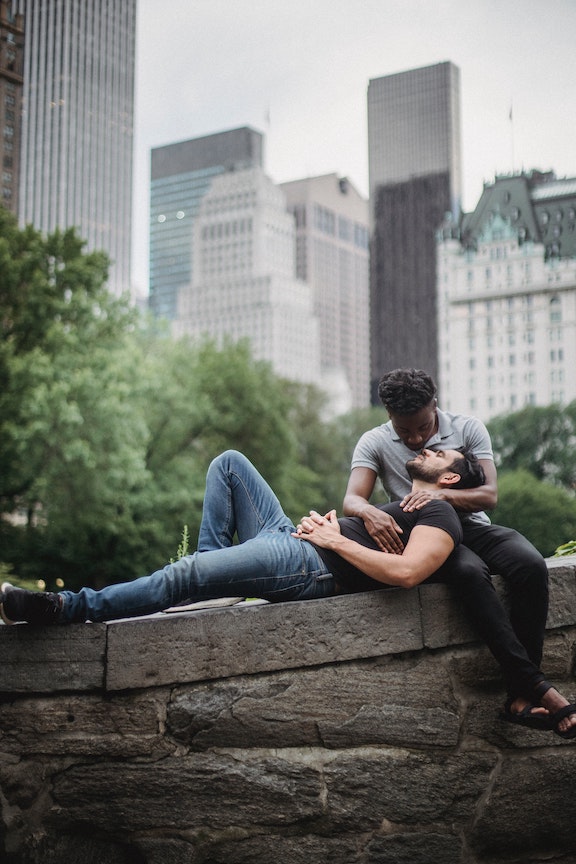 I like bisexual men. Heteroflexbile men. Whatever you’d like to call it. I think guy on guy makeouts and sex and kinkiness is hot. It turns me on.

The idea of “forced bi.”

The idea that as a man you don’t REALLY want to suck cock. Oh, no. You would totally hate to take that big, thick, hard cock down your entirely not eager throat except that your girlfriend is MAKING you!

It’s all HER fault that you need to bend over and get your ass lubed up and practice daily with a variety of sizes of dildoes and plugs to get stretched out enough to be so MISERABLE that when a sexy guy pushes himself inside of you, you have simply no other choice but to whimper and moan and call him Daddy.

Those manipulative vixens! Practically hypnotizing your otherwise entirely straight and totally macho minds into accepting…and gradually even loving getting fucked by other men! In a dress even!

Am I being too snarky?

I understand that it can be a part of fantasy, and that even if they, themselves, don’t find it humiliating to be gay, bi or just sexually play with other men, there are centuries of shame around it. And that long standing shame IS part of the appeal, even if they don’t buy into it when their own dicks aren’t hard.

It’s humiliation play, and just like small penis humiliation, it’s cutting to the core of what our society has taught men about masculinity. Masculine men do not get fucked by other men. MAYBE they top other men. But they certainly do not bottom!

But also, as a woman who thinks that bi men can really sexy, and as an LBGTQA ally, there is just something a little painful about reinforcing those stereotypes and that shame. I want to be like—but baby—I think it would be SO hot to watch you get fucked! Be my good boy and open your mouth wide and take that cock! Ungh! That is so sexy!

And yet I also recognize that I am also totally objectifying bisexuality by wanting to be a voyeur to it. What can you do? I certainly don’t inflict my own desire on bi men by requesting that they show off their sexuality for my enjoyment. I mean, unless they’re my partner or sub and they don’t mind…. 😉 In which case, yes please.

But if control gets you excited and you really want to feel forced into doing something objectifying, can’t I force you do it the WAY I want you to do it rather than force you to have to do it in the first place? I can objectify, embarrass and even humiliate you a little bit without having to tell you that you’re not a “real” man because you like being sexual with other men.