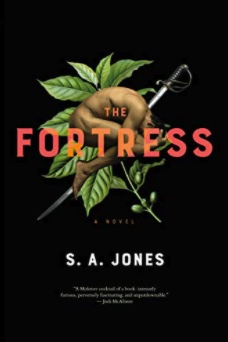 A few months ago, I read The Fortress by S.A. Jones. Now, I know very little about S.A. Jones. Just that she has a website and has written a few other books that I haven’t read–yet. What I cannot say at all is if Ms. Jones has any, shall we say, predilections toward being dominant in her relationships. However, her book is most certainly about just that.

The Fortress is about a city within a city, which is ruled entirely by women. The only men in The Fortress are men who have either been sentenced there for a crime against women or men who have chosen to be there and live under female rule. Our male protagonist in the book is unusual in that he has volunteered to go The Fortress for one year after cheating on his pregnant wife. This is the bargain she makes with him to accept him back.

I should say that The Fortress isn’t really erotica, and sex is not the main focus of the book. It’s more about what a society ruled entirely by women would be like, and this man’s journey into developing more empathy for women. Perhaps a female led relationship to the extreme! And not all the women are painted entirely favorably. The Fortress has some problems like any other city. One could argue that some of the men’s consent is violated.

I finished the book fairly quickly, but the general idea of it stayed with me, and I must admit it crept into the sex I was having with my boy. I sometimes imagined him as one of the men from The Fortress, who came to my room in the morning for me to use for my enjoyment. His was not particularly important. He was more like a pleasurable object for to use than a person. I would get more and more excited thinking about this—that he was my object, certainly not disposable, but not entirely at my level either, and that he knew his place and what he was there for. To make me feel good.

In fact, since I hadn’t actually told him I was fantasizing about this, at one point he was talking to me during sex, and I found myself clamping my hand over his mouth. He likes this, so it wasn’t exactly a problem. But I really caught myself wanting to tell him to turn his head to the side and not look at me while I was using him. The only reason I didn’t was because we had never discussed it. Of course, if he reads this, he’ll know exactly what I was thinking about.

I honestly don’t know if The Fortress was meant to be sexy and to appeal to women like me or simply written to make a point about feminism and female power. But the writer certainly made an impression on me. It’s only a matter of time before I gift the boy a loincloth to wear around me so he’s available any time I want him.

Not sure why, but I have Dazed and Confused on my mind this morning. I always love me some mean Parker Posey.