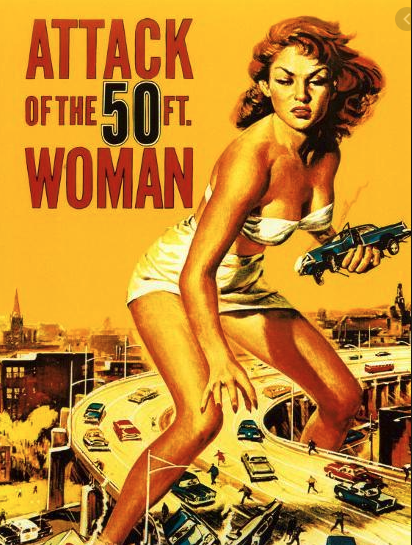 Thanks to my new phone conversations, I got to learn more about a kink yesterday!

I was aware of giantess fantasies before this. (Death by Snu Snu!) I can’t say that I’ve personally met a lot of people in the Scene with this kind of fantasy—maybe just one or two—or maybe more just never mentioned it to me.

But it always seemed like a great kink to me, just a very innocuous kind of kink that was very imaginative. Although, I am also aware that some giantess fantasies end with being eaten by the giantess.

And the person I talked to about the fantasy was nice and appreciative and told me so much about the kink and what they liked about it. I just ended up thinking, this is great! This is so much fun, and probably healthier for me than obsessing about the election tomorrow.

I don’t want to say too much that’s specific about what I discussed with one person. That’s not representative of the kink as a whole or respecting their privacy.

I don’t think it would ever be a fantasy of MINE. As a woman, I feel like I’ve spent all my life wanting to be physically small because that’s what society perceives as attractive. But it was a fascinating fantasy to talk about. I think that I think about the more common kinks so much that I forget about less common ones.

The human mind is amazing!

4 thoughts on “Death by Snu Snu”