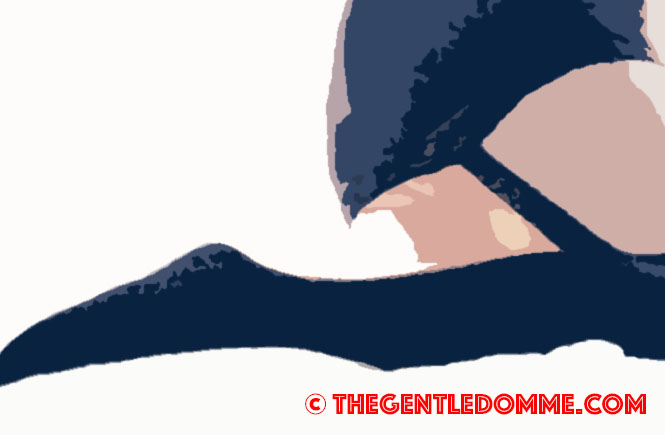 In my last blog article I talked about what to do if your male partner comes to you and wants to dress up like a woman. In that article we talked about cross-dressing and feminization and the differences between the two, especially that while cross-dressing is not necessarily submissive, feminization fantasies usually are—at least a little bit. So, start there if you need some help understanding these terms and their distinctions….

There is another “level” or “type” of feminization that’s called sissification. Most of us over a certain age can remember the word “sissy” as a slur against boys who weren’t acting manly enough, or whatever the schoolyard bully or an abusive dad or older brother decided was manly enough. Being a sissy meant that you were a weak boy who acted like a girl. It was one of the worst things a boy could be called.

Sissification has its roots in that humiliation. It’s basically feminization taken the to the extreme. A stereotypical sissification fantasy would be a man who is dressed up to be ultra-feminine. He would have a long, curly wig, wear garish makeup, a lispy voice, a French maid’s uniform and be put into service cleaning his domme’s house, with her gentle or not so gentle encouragements. This is a major stereotype here. But it’s the one you will hear dommes who dislike sissification complaining about ad nauseam. For a somewhat valid reason.

Okay. Well, first, you don’t have to be into sissification just because you’re into feminization. Think of this all like a spectrum or a buffet. You can pick and choose what you like. So, don’t assume that because your partner is into the idea of feeling like a woman, he also wants to wear doll clothes and frilly socks and clean your house with a feather duster while you swat at him with a crop.

The reason that a lot of dommes are not into sissification, even the ones who are into guys who like to cross-dress or be feminized is that they see sissification as humiliation play. They feel that the men who are into it consciously, or more likely subconsciously, see being a woman as something that is less than a man—and therefore worthy of being made fun of.

The reason that a lot of dommes are not into sissification, even the ones who are into guys who like to cross-dress or be feminized is that they see sissification as humiliation play. They feel that the men who are into it consciously, or more likely subconsciously, see being a woman as something that is less than a man—and therefore worthy of being made fun of. Rather than questioning why being called a sissy is a bad thing—is it so bad to be feminine—they believe that these men have internalized the shame of not being seen as masculine enough and are acting out this shame through kink.

One big subgenre of this entire fantasy is forced feminization, which is exactly what it sounds like. It’s when your domme “forces” you to dress and act like a woman to humiliate you. There’s also an overlap here with “forced bi,” which is when a submissive man is “forced” to be sexually submissive to another man. “Forced” in heavy quotation marks, because of course, the submissive wants to be forced. That’s part of the fantasy. He doesn’t really want to dress up like a girl or give another man a blow job. You’re making him do it, so it’s not his fault!

It’s a little easy to roll your eyes at this, but when you think about it, it’s not so different from romance novels where women are taken by rich, powerful, gorgeous men and “forced” to endure their passionate lovemaking. Non-consent fantasies are hugely popular in both sexes. They allow people to feel free of the internal shame they carry around about their desires.

But, obviously, since femdommes are women, some feel that encouraging this behavior is essentially saying that it is humiliating to be a woman, or it is humiliating for a man to be a woman or be like a woman. This is particularly loaded now that we, as a society, are becoming so much more comfortable with the non-binary and with violating these perceived gender norms. And being a femdomme theoretically means that you are supposed to be a powerful woman. So, how can a powerful woman condone fantasies based on misogynistic stereotypes about women?

Some dommes just don’t like it for this reason. They feel like they are essentially agreeing with the schoolyard bullies instead of saying that there’s nothing wrong with feeling, looking or acting like a man who isn’t stereotypically masculine.

Some dommes just don’t like it for this reason. They feel like they are essentially agreeing with the schoolyard bullies instead of saying that there’s nothing wrong with feeling, looking or acting like a man who isn’t stereotypically masculine. They also might say that “forced bi” is just a way for a man to resist coming to terms with his bi-sexuality, and that he’d be happier if he could accept that part of himself.

For this reason, you will find quite a few dommes who are totally cool with cross-dressing and feminization, but who draw the line at forced feminization and sissification. They have no problem, and might even think it’s hot, to have a partner who flirts with gender norms for fun, to feel sexy and pretty, for role play, but they dislike this kink if its born out of a desire to be humiliated for being feminine.

And, of course, there are plenty of dommes who have no issues with forced feminization and/or sissification. They might say that kink is kink, and in kink we play with a lot of taboos, and they don’t judge. They might enjoy the humiliation aspect of forced-feminization and sissification because they enjoy humiliation in general, and they feel like if their partners like it and they like it, what’s the problem? Or they might feel that it’s not degrading at all to women, but just degrading to men to turn them into what are basically cartoonish versions of women. Some people might even feel like it’s a safe way to exorcise those demons of not feeling manly enough. Nothing in kink is ever black or white…just black and blue.

So, now that’s we’ve explored why some submissive men are into cross-dressing, feminization and sissification, let’s discuss how you can work these kinks into play, if you want to do that. Stay tuned for my next article in this three-part series….